There are many things to consider when planning a vacation to a new destination, such as the climate, sightseeing, accommodation, activities, and, of course, food.  As a visitor to the Dominican Republic, what can you expect to find when looking for a meal? Caribbean creole cuisine, of course, but with a distinctive Dominican twist. Whether eating at a roadside stand, a snack from a vendor on the beach, or a one of the traditional Dominican Republic restaurants, you will experience the rich wonders of Dominican Republic cuisine.

The word 'creole' comes from the Portuguese word, crioulo. This word originally referred to someone of European ancestry who was born on a Caribbean island. The Dominican Republic was originally settled by the Taino Indians, who used the natural resources at hand for their cooking needs. Some of these ingredients and cooking techniques have been handed down and are still a part of the national cuisine.

When the Spaniards arrived, they brought with them many new fruits, vegetables, and animals. The newcomers also brought food and new ideas that had been passed on to them during the centuries of Arab rule over Spain. The French controlled the island for a period, and a high number of Africans were brought in to work on the sugar plantations, both having an important cultural and culinary impact on Dominican cooking.

Thus the creole cuisine – criollo in Spanish – of the Dominican Republic, although similar to creole dishes of other Caribbean islands, offers local Dominican dishes featuring a unique mixture of Spanish, French, Portuguese,  African and Taino ingredients, flavors and aromas.  Dominicans are well-known for taking dishes from other parts of the world and remaking them into Dominican creole dishes using their own local spices and ingredients.  Dominican food differs slightly from other Caribbean creole dishes in that it is somewhat milder and less spicy, and uses onions, garlic, cilantro and oregano. 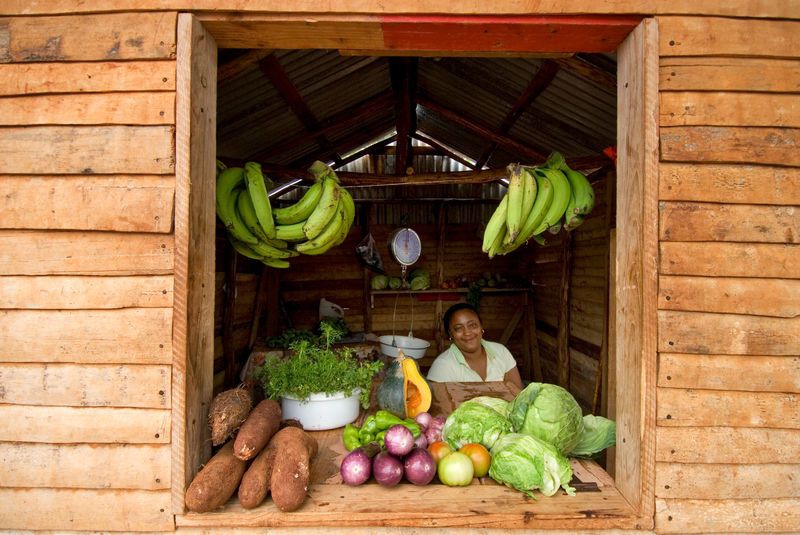 Dominican Republic recipes are often passed from one generation to another without being written down.  So Dominicans learn how to cook dishes, but don't necessarily know the exact measurements of the ingredients.  The most important aspects of Dominican cuisine are how easy it is to cook, its spontaneity, and the use of fresh ingredients.

There are several methods that Dominicans use to prepare their meals.  Meat, including chicken, beef and pork, can be made into delicious spicy stews, or can be roasted or fried.  Many Dominican dishes begin with sofrito as a base.  This is a sauce made of spices, herbs and vegetables such as thyme, salt, garlic, onion, green bell pepper, coriander or cilantro, tomatoes and vinegar.

The dishes that Dominicans make depends on where they live. In the inland mountainous areas, meat, especially pork, is popular, and is often stewed or cooked for a long time.  Along the coast, fish and seafood like lobster, shrimp, marlin and mahi-mahi are prepared with coconut milk and eaten with rice.

Dominicans are known to have a sweet tooth, so desserts are numerous and consist of nutritious beans, fresh coconut, sweet milk and tasty roasted peanuts. 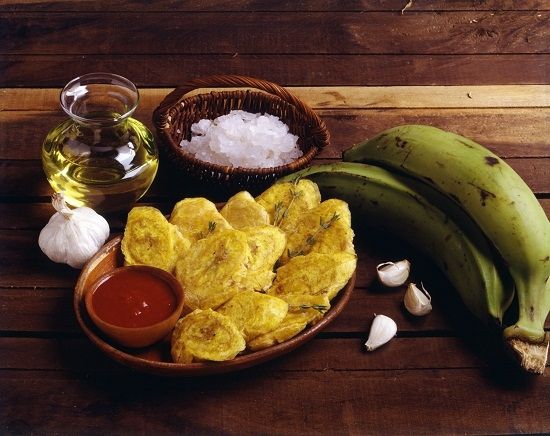 Let's explore some of the mouth-watering dishes of the Dominican Republic.

There are many popular national dishes in the Dominican Republic.  Here are a few examples:

La bandera: or 'The Flag', is the national dish consisting of white rice, kidney beans and meat.  These are served separately and accompanied with tostones or green plantain, and a salad.

Sancocho: from the Spanish verb sanchochar, “to parboil”, is a very hearty traditional soup or stew found in Latin American cuisines.  Although it originated in Spain as a dish called Cocido, it is considered a national dish in the Dominican Republic; it is often prepared for special occasions; and it is considered to be 'comfort food' by many locals. Although it contains many ingredients including meat, red beans, rice and vegetables, the long preparation time of sancocho passes quickly with the help of friends and the enjoyment of a cold beer or some local rum. For example, Sancocho de siete cames (7 meat stew), the ultimate sancocho, contains beef, chicken, goat, a variety of pork products (pork chops, fatty salt pork, ribs, pork sausage, etc.), plantain, cassava, potatoes, white and yellow malanga or yautia, cubanelle pepper, parsley, garlic and pumpkin, which is what gives the stew its beautiful creamy color.  Sancocho is a special dish unique to the Dominican Republic.

Mangú:  The official breakfast of the Dominican Republic.  Because many Dominican recipes contain plantains, Mangú is one of the most popular and best-known plantain dishes in the country. The dish came from west Africa, and the plantains are boiled and mashed.

Casabe: bread made from yuca, or cassava.  It is a thin flatbread made without leavening.

Arroz Locrio: Arroz means “rice” and Locrio means “stew-creole”.   Arroz Locrio is similar to Spanish paella and is one of the most popular and enjoyable dishes to be found in the Dominican Republic. It generally consists of rice and chicken, but it can also be made with many other ingredients such as pork and pork chops, salami, herring, cod, beef, and sausage.

Arroz Moro: Although it is typically a combination of rice, red kidney beans, and cooked meat, Arroz Moro is sometimes made with cod in select parts of the Dominican Republic.  Beans are an inexpensive and important part of the diet in many places in Latin America, including the Caribbean, and Arroz Moro is a simple and delicious variation of rice and beans.

- Dishes Made for Traditional Feasts:

Lechón: At Christmas time, Dominicans enjoy lechón, which is a traditional dish of pork that has been roasted on charcoal.  People generally buy lechón rather than cook it themselves.

Bacalao: During the season of Lent, many Dominicans eat the traditional dish of bacalao, or creole codfish, on Fridays.  Because sailors transported codfish across the sea, they needed to preserve it, and they did this by salting the codfish. This is how salted codfish became known and introduced into Caribbean food, and explains its adoption into Dominican cuisine. 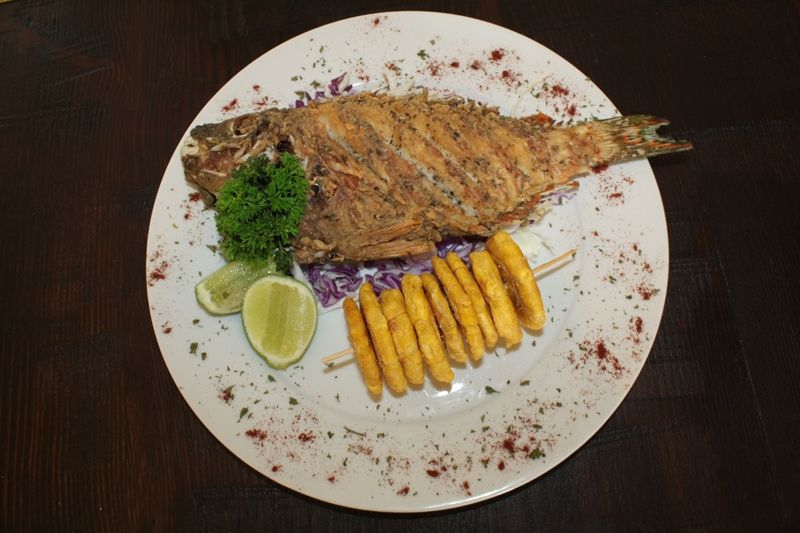 Habichuelas con dulce: This is a sweet creamy bean liquid beverage that is popular around Easter. It is made in large quantities to be shared with friends, relatives and neighbors. Traditionally it is served with cookies or with casabe; and no two homes prepare it the same way. To make habichuelas con dulce, red beans are boiled in water until very soft. Next are added coconut milk, condensed milk, cooked sweet potato chunks, butter, raisins, sugar, salt, cinnamon, nutmeg and sometimes cloves and ginger.

Pescado con coco: a typical dish found in Semana bay. Fresh tropical fish in creamy coconut sauce with aromatic herbs is a delicious local combination that simply has to be tasted.

Chivo Liniero: Although goat meat is eaten in many areas of the country, Chivo liniero is most popular in the Northwestern region of the Dominican Republic. Montecristi is the original home of Chivo liniero and this remains the best place to try this spicy stew of tender goat meat.  The distinctive flavor comes from the oregano and other vegetables that the goats eat out in the fields.

Empanadas: These turnover pasties can be found in just about every Spanish-speaking country in the world, but each country has modified the size and ingredients of the empanada recipe.  So although they are not unique to the Dominican Republic, empanadas are found across the country and are an essential addition to every party platter, a popular snack sold on the street by vendors, and a quick meal after a night on the town. They can also vary in size from large, for a satisfying meal, to small, for petite appetizers. There is also a special kind of empanada, the dough of which is made of cassava.

Pica Pollo: a kind of fast food often eaten with tostones (see below).  Pica Pollo is found just about everywhere in the Dominican Republic, whether in a big city or a small town.  After a party or a few drinks, Pica Pollo is the perfect way to grab a quick bite. The secret to this delicious crispy fried chicken is the flour, the crispy texture that results from deep-frying, and the addition of the special flavor of Dominican oregano.

Tostones: Tasting a little like French Fries, the most popular side dish in the Dominican Republic is Tostones.  Perfect as a garnish to the main course, Tostones are narrow and flattened slices of fried and salted unripe plantains.

Yaniqueques: Made of wheat flour, water, baking soda and salt, yaniqueques are warm, salty and crunchy fried tortillas.  They are a big part of Dominican culture and locals find them hard to resist.  They can be found all over the country, sold by peddlers and at all of the Dominican beaches.  It is said that the name, yaniqueque, comes from, “Johnny Cakes,” the recipe having been brought to Samaná by sugar cane workers from the Lesser Antilles more than one hundred years ago. One of the best places to try a yaniqueque is in Boca Chica where a beach version of the yaniqueque can be found.  Here it is called the Longplay, and references the Vinyl Record (33") due to their shape and size. Is served with fried fish.

Now that you have read about the delicious cuisine of the Dominican Republic, do you feel aplatanado? In the Dominican Republic, aplatanado means “plantain-like”. Because plantains are an important part of the national diet, to be called aplatanado suggests that you have been accepted as being just like a local: “You are one of us.”  If a Dominican calls you aplatanado, it is certainly a flattering remark.  It shows that you have learned the customs of the people here. If you enjoy living in the country, have a passion for the national cuisine and for the rum and beer at the local bars, and love to dance to Dominican music, then you are living like a local.  You are aplatanado!